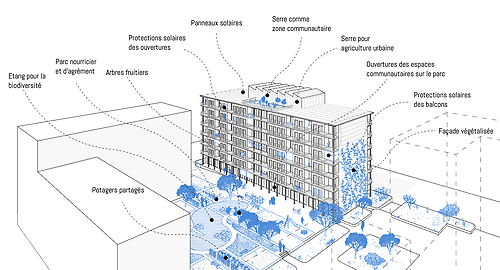 The proposed public housing building is part of the Cherpines eco-neighborhood and must become an example of sustainability, both on the construction and social levels. 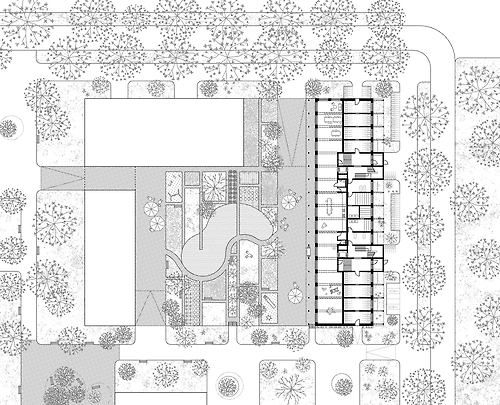 The common spaces on the first floor - which can be partitioned according to the desires of the inhabitants to define common rooms, workshops, work spaces or others - open widely on the courtyard side towards the southwest.

This courtyard is drawn on a grid that recalls, in its scale, the former farm of the site. The juxtaposed strips create a patchwork of atmospheres and uses: orchards planted with fruit trees, flowering meadows, vegetable gardens and playgrounds. The strict geometry of the ensemble is broken by a pond that participates in the management of rainwater, and favors the amenity and biodiversity of the block.

The circulation within the building is carried out by means of a passageway which is sometimes detached from the facade to offer more intimacy to the rooms which border it, and which sometimes comes closer to it, thus acting as a generous entrance landing, favourable to the cohesion of the community.

The apartments are organized around a through living room opening onto a southwest facing balcony. The kitchen, located in its center, can be closed if necessary. This arrangement allows for easy natural ventilation of the apartments. 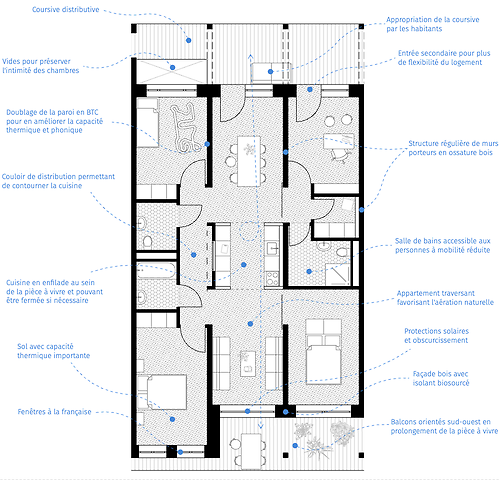 The roof of the building hosts a greenhouse for urban farming opening onto a community terrace and a planted area in order to reinforce the biodiversity of the place and the meetings between inhabitants.
The facades are decorated with local wood cladding and the south-east gable facade is planted with climbing plants to reduce the heating of the facade in summer and to capture polluting particles and CO2 present in the atmosphere. 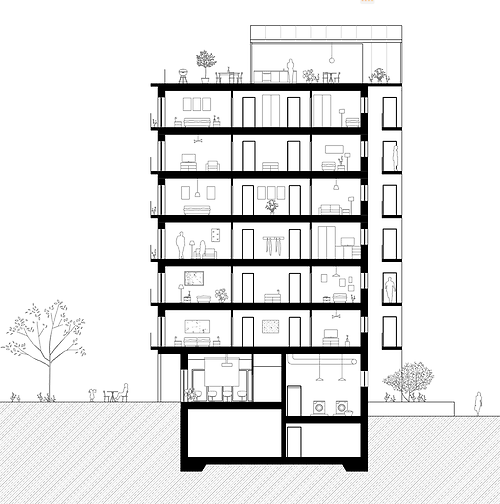 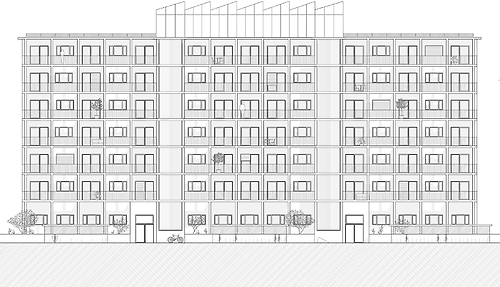 In addition to a system of treatment of grey and black water by worm composting in the basement, the numerous photovoltaic panels which meet the electricity needs of the inhabitants, and the distance heating which covers the heat needs, the construction itself follows the principle of “decarbonization”. 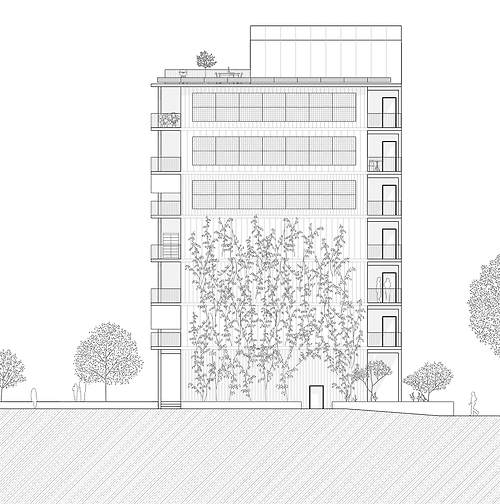 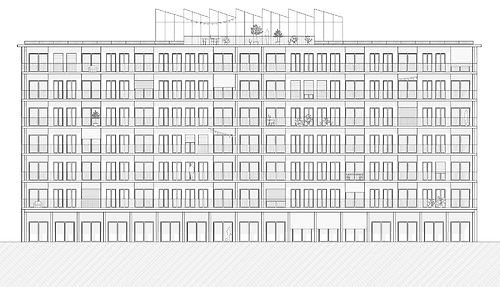 The supporting structure is made of wood, a biobased material with a greatly reduced carbon impact when managed locally and rationally. The earth from the site’s excavation, in addition to being used in the exterior landscaping, is used in the form of coatings and compressed earth blocks (CEL) to improve the building’s summer thermal, hygrometric and soundproofing performances. Insulation is also provided in local bio-sourced material, for example from straw, a by-product of cereal cultivation.

The other construction materials and equipment also follow the logic of circular economy by being derived either from biomass, or from reuse or recycling, and their implementation aims at an easy dismantling and sorting during maintenance or end of life of the building.